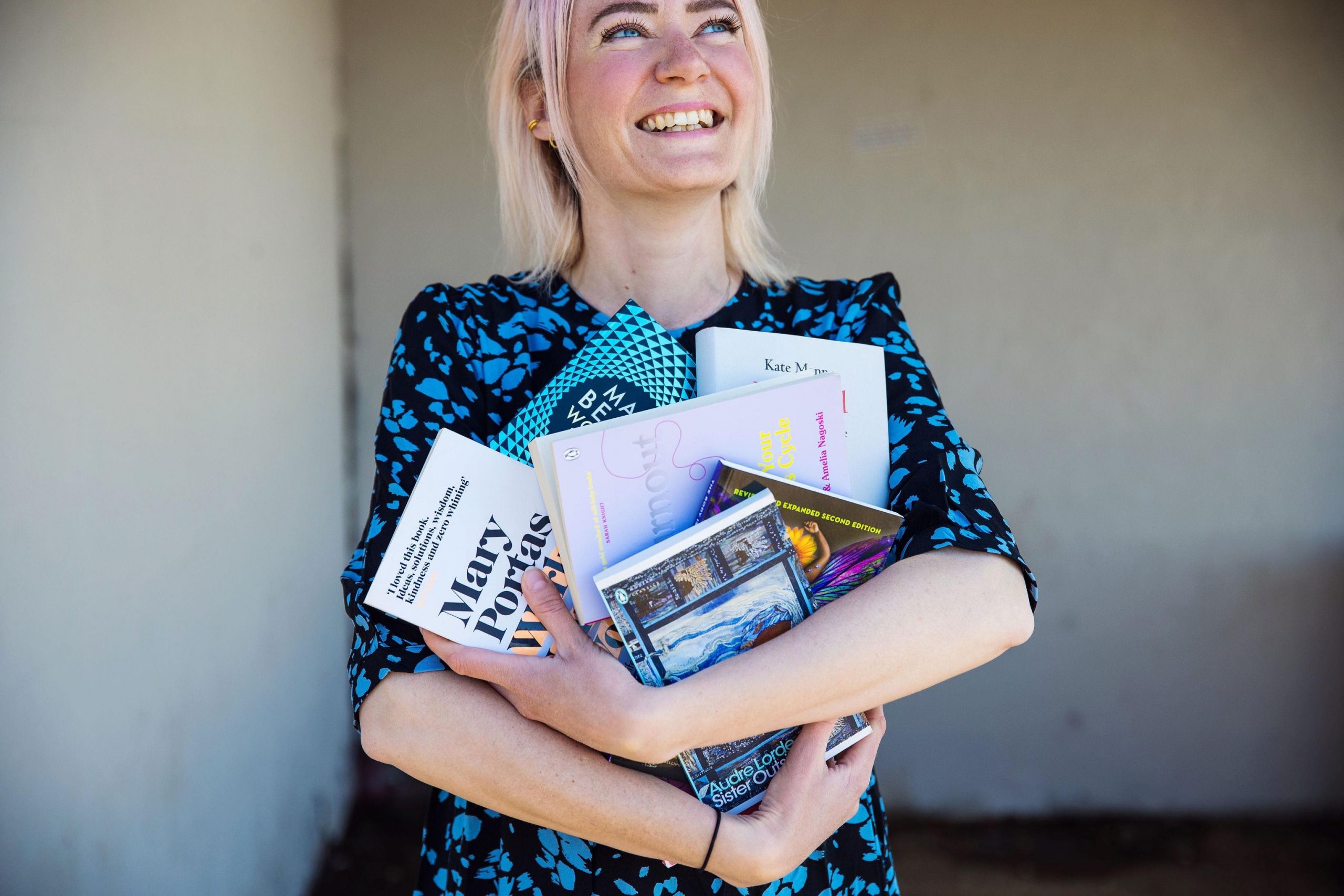 Babes, it’s basically feminist Xmas- it’s International Women’s Day week, and the theme is #BreakTheBias (Should also point out that internationalwomensday.com which comes up with these themes is not the authority on IWD, the UN officially recognised it in 1977 and provides a less polished/ corporate, more thoughtful and informative take here).

What the beejesus/ bejeesus (ok how do you spell bejesus?) are YOU meant to do about it? You’re already absolutely knackered, overwhelmed, trying to cope with world news and stay afloat 2 years into a societal shitstorm we were not prepared for.

So, is there even any bias to break, babes? We are often told WOMEN HAVE NEVER HAD IT BETTER!

Number 1, not sure that’s true. Number 2, if it is true, it’s only in the context that ‘people’ have never had it better. Number 3, AND WHAT OF IT?

In her book ‘We Need New Stories’, Nesrine Malik describes ‘the tyranny of a system in which your rights are enshrined in theory but can be rescinded at any time’. This speaks to me. Because this is the torment of modern times- there is SO MUCH for misogynists to point to and delightedly declare, “See! You’re fine now! Better than ever! The law!”

They propose that ANY remaining inequality is caused by women themselves- women don’t WANT those jobs, women LIKE attention from men, etc. “Women”- a distinct subset of humans, monolithic. But it’s NOT ALL MEN. Because men are individual human beings in their own right babes! They don’t deserve to be tarred with the same brush. They are worthy of our humanity. Entitled to it, even. (Another excellent read is Entitled, by Kate Manne).

One of the most chilling moments of my feminist journey was hearing “himpathy” described- something I’d experienced, but couldn’t name. This is a term Kate Manne coined in another book, “Down Girl: The Logic of Misogyny”- she actually says her husband came up with it. It describes the excessive sympathy shown towards male perpetrators of sexual violence.

We see a similar phenomenom when we compare the way white people’s violence and terror is considered and reported on compared with that of people of colour. White men who murder are mentally ill and traumatised. Men of colour who murder are evil extremists.

In my experience, the most uncomfortable thing (God, uncomfortable just doesn’t cut it- what I mean is, the thing that makes me feel so drenched in shame I want to crawl out of my skin and evaporate), is the most effective. What do I mean by this? It’s EASY (with practice) to notice and to point out other people’s biases, and the biases of systems. It’s HORRIBLE to notice and interrogate your own.

In 2020, I took part in Nova Reid’s Anti Racist Allyship course, and it really shifted something for me. You can get her book, The Good Ally here. Nova helped me to realise quite how biased I really was (and still am!), and how the motivations I brought to conversations about equity and justice were often fairly self serving and self soothing. I’m not ashamed of this babes, and if you’re in the same boat, you don’t need to be ashamed either- I believe that this is a fairly necessary stage of the journey we go on. We are human, after all.

If we truly want to #BreakTheBias then we are required to confront the bias within. My February read for my Mastermind Group was The Body is not an Apology by Sonya Renee Taylor. In it, she describes ‘making peace with difference’. She says, ‘the only reason we would need to erase someone’s difference is because we still equate difference with danger, or undesirability’. I think that we are tempted to ignore difference, to pretend we don’t see it, because there is conditioning to acknowledge that we do not want to identify with or admit.

We don’t get equity without honouring difference. And so denying our own biases, and making it increasingly unsafe for others to explore theirs keeps us stuck.

All of this behaviour is DRENCHED in shame. Those of us who are interested in becoming better members of our communities (locally and globally) are very vulnerable to shame. We look at the way we used to see things, and we cringe from head to toe. This is why I often share the dreadful perspectives I held as a young adult- so others know they are not alone, and that change is possible. We can put so much energy into hiding the things we used to think (God, I’m sure I still think some ignorant and ridiculous shite NOW), that we have nothing left to devote to contributing to an evolving society.

If you grew up in a Western society, it is INEVITABLE that you have in built biases that are not in alignment with what you say you value. This does not mean there is something wrong with you, or that you are bad, or even lying. It just means that you are a human who came up in a racist, patriarchal, capitalist shitshow, and that shit is smeared all over the lens through which you see the world.

I know it is scary to get into this stuff. There are real psychological risks around conflict, judgement and failure. We risk connections at a time when it can feel there are barely any left.

And so we come to Audre Lorde, and these words from Your Silence Will Not Protect You.​

“My silences had not protected me. Your silence will not protect you. But for every real word spoken, for every attempt I had ever made to speak those truths for which I am still seeking, I had made contact with other women while we examined the words to fit a world in which we all believed, bridging our differences.“

We have the right to remain silent, but who does it serve, and who does it harm? Silence isn’t a passive option, it’s an active choice. In a society that is increasingly hostile towards the poor, immigrants and refugees, and with women shouldering most of the burden of that amongst those groups, the flaws in this ‘argument’ that WOMEN have never had it better come into focus.

Middle class upwards, white, non- disabled, slim, straight, cis women have never had it better- and they have STILL never had it as good as their male counterparts.

All the other women have all the same problems and 99 more.

And as we learn from bell hooks,

“When we are taught that safety lies always with sameness, then difference, of any kind, will appear as a threat”.

Babes, it matters to me that you know that all humans deserve liberation from these systems.

I am fearful of my sons becoming part of them- it’s already begun to seep in. They are 8 and 5 and I work really hard at this. The war on patriarchy is not a war on men.

As Otegha K. Uwagba tweeted, “Men should be glad women want equality and not revenge.” (Really recommend her book, We Need to Talk About Money).

As much as we may fantastise at times, none of us are really out here asking men to make up for the wrongdoings of their ancestors etc etc as men’s rights activists would have you believe. You are not harming your sons, brothers, husbands, fathers, etc in pursuing change. You are freeing them from a system that promises them the world if they ‘man up’, next denies most of these rewards on account of not being one of the chosen privileged few who hoard power and money, and then tells them to blame women and refugees for their lack of ‘success’.

I note my inclination to apologise for a ‘negative’ email during an already heavy time. I observe my reflex to check what I’ve written again to check if my anger is restrained enough to be palatable. I see myself checking the word count to assess whether I’ve asked for too much of your attention today.

And I’m reminded of Mona Eltahawy’s brilliant book, The Seven Necessary Sins for Women and Girls.​

At the start of the book, she offers us an invitation.

Make your heart too rebellious for patriarchy to plant itself within you. Make your mind too free for facism to chain your imagination.

So you think you’re a fraud?