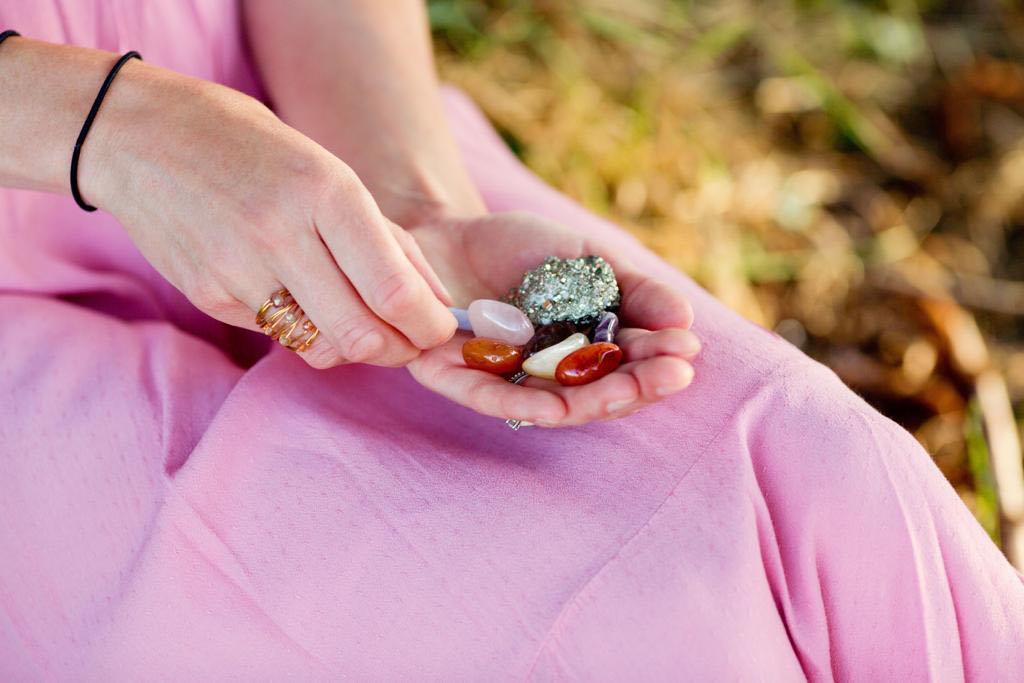 Babes, I’m woo. Through and through. Don’t worry, I’m not gonna rhyme this whole thing.

Let me briefly outline my own relationship with all things ‘alternative/ hippie/ not sure what to call it but woo’, and then dig into why I’m writing about this today.

I haven’t always been this way- when I went off to Uni to study maths, with some economics and accounting thrown in, I wasn’t hugging trees or keeping crystals in my bra. But I did read You Can Heal Your Life when I was about 13, when my mum got super into it all during her cancer treatment, so I guess the seeds were planted. Microwaves were out, organic was in, and so was hypnotherapy. Affirmations. The concepts of self love and acceptance. This was 1998, and I didn’t carry much of this into the new millennium with me, or at least not consciously.

Perhaps it was always gonna be a slippery slope to astrology, reiki, and taking more interest in my angels and guides than actual people…

I’m writing this because I felt triggered recently. The wonderful Lauren Currie OBE, whom I agree with about many, many things, and admire hugely, has posted a few times about being weary of the woo. About her frustrations with women attributing their success to rocks in the sky, and her sense that a trend towards women being more woo is halting our march towards gender equality.

I’ve given this a lot of thought, and I wanted to get my thoughts down, because if you identify as feminist, AND anything from a witch to a woman who is curious about magic, I am with you, and I actually consider a leaning into the mystical to be a part of my feminism.

So let’s get into it. I think it’s probably true to say that there are very few men walking around with quartz in their bockos (how do you spell bockos?). They might have a lucky sports shirt they need to wear when their team are playing, a seat they need to sit in to watch them, or a particular set of numbers to back on the dogs or horses. There are certainly plenty wearing, or sporting tattoos of crucifixes, or other religious symbols. But nothing as silly as a marvellous piece of the earth on their person… Hello. Double. Standards.

I absolutely hear the concern, though- women generally attributing their successes to forces outside of themselves, and men claiming ownership of theirs is a demonstrable phenomenon.

But that’s not my experience of welcoming more woo into my life. Wanna know why I went from crucifixes to crystals? (Yep, I went to a Catholic school from 4-18, then was just a hard core atheist without a microwave for many years).

I stopped loving Christianity when I began to understand the patriarchal nature of all organised religion, and the corruption of the Church particularly. I guess I could go on for YEARS about this stuff, but it’s not why you are here. Mary Magdelene Revealed, by Megan Watterson, is an interesting read if you’re up for it.

I was glad to be outta there- no longer required to confess my sins to a stranger in a dark (shame inducing) box, leaving behind the sense that I could never be as enlightened, or close to the Divine as someone with a penis, etc, all good.

But I was missing something- rituals, community and MEANING. Now look, there are LOADS of ways to bring meaning to your life that don’t involve incense, I accept this. For a lot of people, sport is the answer, as referenced above- a stadium is a sort of place of worship, team members are like a line up of Greek Gods, and shared desire, plus family tradition, is cohesive and comforting.

Babes, I don’t like sport. But I do like to be playful, and the woo meets all my needs in this area. It’s both my hobby, and part of my world view. It’s FUN. It sparks curiosity in me.

The rituals mean- I bring beautiful objects, crafted by nature into my home, leaving me in awe of what the planet provides for us each time I look at them, and increasing your gratitude is a no brainer in terms of impact on your emotional wellbeing.

The community means-  I sit and have deep and personal conversations with wise women- perhaps these spiritual counsellours would have just been ‘my mates’ in past lives (yeah, I’m into that). They are my mates too, but we get swept into less useful conversation when we meet in other circumstances. The woo creates space for this level of connection, for this focus on ideas, legacy, patterns, comforts…

The MEANING- look. The meaning doesn’t come FROM the woo. The woo facilitates meaningful realisations from within ME. I love to look for signs, for example. In the numbers, in nature, in synchronicities, anywhere I can find them. But I am very clear- seeing them means that I WANTED to see them, and that is the sign. That I was open and alert to confirming something I hoped to be true.

Same with my oracle cards. Yes, I pull cards. Sometimes, when I pull one, I tingle from head to toe- ‘this is what I need to know today’. There’s that gratitude again- thank you Universe, for providing me with this guidance. What about the days when it doesn’t mean as much? Well, it just doesn’t mean as much. I believe something will drop in over the course of the day, or that the information will become useful in another way- perhaps in informing a response to a client or friend’s musings. Or I forget about it.I don’t walk around feeling like the Big U has forsaken me.

For me babes, it’s WIN WIN. I am fully available for the placebo effect. Accessing power from within my own brain, to help, or heal myself in some way- why does it matter what triggers it? Why do I have to pretend I’m not into this stuff in case men (or anyone) won’t take me seriously?

Meditation, yoga, affirmations… where do science and spirituality meet? We haven’t always had the evidence for these 3 practices, as examples, and now know that they can have brain and body altering effects. The lovely Claire Rother reminded me, “science is the modern language of the mystical”. Maybe one day we will know for sure that black tourmaline changes the frequency of the energy around us.

The one that really sets eyes rolling is manifestation- many thanks to The Secret, and other Law Of Attraction stuff, which my friend Tamu rightly points out, lacks nuance and gaslights black people, and other marginalised groups.

Despite it’s problematic foundations, there are some helpful principles that I accessed through my manifestation practice that have supported me to attract and receive many things.

(Yes, you can get on board with this stuff without the woo, but for me, the meaning I attribute to this work drives my commitment to it).

I feel like there is a much bigger conversation that we could get into around this, but my word count is already off the charts, so I’ll leave it here, with this:

Let’s not forget, women have long been criticised, murdered even, for trusting in things that cannot be measured or explained. Or rather, things that were not invented by, or led by men. It’s fair to say, I’ll be holding onto my broomstick for now.

How Can You Stay Positive Right Now? I think that’s the wrong question, babes.

The Motherhood Penalty, The Pay Gap, and the Gap in the Narrative.

All you do is NAG…